Trip to London:
Took a bus to London. That's right, I said BUS. heh heh
The trip started off a little shaky--I was going through my travel bag, making sure I had everything I needed and came across my passport. I took it out, looked at it, and decided I didn't want to take it with me because I wouldn't need it and I didn't want to get robbed and lose it. Yes, I took my passport out of my bag and PUT IT BACK IN MY DRAWER. (Borders, say wha...?) Needless to say, when I tried to check in and get my place on the bus I wasn't allowed because I DIDN'T HAVE MY PASSPORT.

Well, the bus left in 32 minutes. I was about to admit defeat and wait around for the next bus (which left 4 hours later...gah!) when my feet, of their own accord, started running back to the metro. SOMEHOW I made it back to my apartment after three train transfers, a seriously crowded market maze, through the rain, uphill both ways, and back to the bus station with passport in tow, where I breathlessly arrived 29 minutes later only to find that the bus driver himself was running about 6 minutes late. It's really fun being the Very. Last. Person To Board.

Settled in my window seat, I spent several pleasant hours staring out at plowed fields with powerlines planted massively through the middles, looking for all the world like another Indiana landscape until I caught occasional startling sight of giant metal windmills, red clay rooftops and road signs en français. We were making good time until we hit Calais border patrol, where after the third time getting off the bus for more security pass-throughs, les Frenchies grumbled loudly about the "stupid Brits, they are doing this to us because we are French!" (Imagine, if you will, a fabulously fake Kevin Kline French accent for that last part. It makes it way funnier.)

Anyway, skipping the rest of that butt-numbing ride (I'll just say that the bus-toting ferry going over was awesome, the windowless bus-sized dumpster bin loaded onto the very underground and rollicky TGV going back was NOT), I arrived in London just in time to meet English Rose and her friends for a much needed drink, at which point I was (willingly, natch) coerced into attending a concert at the (in)famous Roundhouse Theatre.

And who should be performing at this historic event? 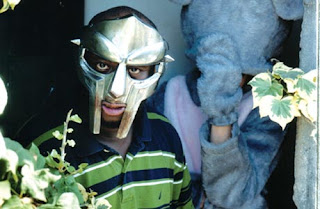 OK, so I know this dude is a music producer (why I know this I have no idea. Bob Boilen?), and I vaguely recall that he does some sort of hiphop nonsense, but really, no clue, kids, no clue. HAR HAR!

Standing in the awesomeness that was the dimly lit roomful of funny-accented Brits and really loud incomprehensible music, I thought of precisely six people:

1. Willis, because I was drinking Strongbow out of a plastic cup (happiness-in-a-can-baby!).
2. Hoonie, McMolo, Simms and BBB, because I could see them grinning and shaking their heads in disbelief-yet-belief that OF COURSE kK had ended up at a DangerDoom show of all places.
3. Seth Green, speciffically his Italian Job character who finally gets speakers so loud they blow women's clothes off.

I was, in fact, surprised to walk out of that place with ribs and lungs still attached, much less my purple Parisian t-shirt. It kind of reminded me of the Metallica/Godsmack concert I went to a few years ago, less one very important pair of earplugs. 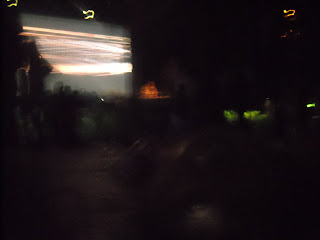 (Now you know what it looks and feels like to be surrounded by DangerDoom tunes.)
The rest of the lovely long weekend was blissfully restful and un-touristy...late night giggling attacks, late morning coffee and music breakfasts, afternoon visits to a couple of libraries, and one very important dinner: 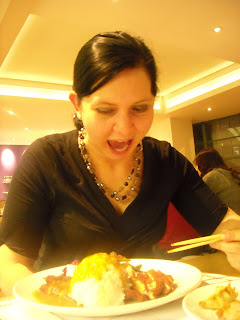 WAGAMAMA! WOOHOO!
God save the world's best dumpings!
Posted by kK at 23:51 3 comments: