Awaiting me at the Grand Palais was an exhibition of Turner Et Ses Peintures. I stepped into the cool interior, one of about five peeps under the age of 50. The exhibit was extremely well organized (quel surprise!) and the flow of the crowd went smoothly from one room to the next. The idea was to hang a Turner painting and then the "original" painting that had inspired him. I was expecting an eye-roll exhibit, like hey, here's the master painting and look how obvious it is that Turner basically copied it onto a new canvas. So I turned the corner and BAM! Talk about 3-D, move over, Avatar!

It was like eating a meal at each stop. Really, I had skipped breakfast and decided to hold off on lunch until after Grand Palais, so my tummy was a bit rumbly and my mind was on the sandwiches I'd packed that morning in my bag. After this, 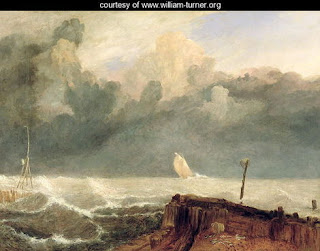 ... the thought of sammies was instantly swept aside in a torrent of mental meal FOOD. I felt like a pig in mud, rolling around mentally so vividly it felt like I was really inside the still-wet painting as Turner, brush in hand, a not at all surprised smile on his face, looked on in bemusement at the crazy, embarrassing kK moment.

It was incredible to witness this "influences" exhibit, which completely erased the smug smile off my preconception. Looking at the "original" next to the Turner version, it was like BOOYA, I take your Italian Master and raise you THIS: 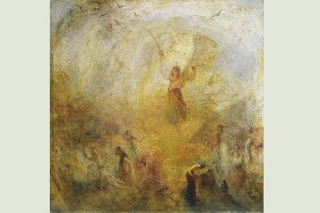 It was almost embarrassing for the admittedly awesome Originals because compared with even the earliest works, Turner schooled them all in what made the others seem like child's play on amateur night. He was always his own man; you could see how the masters influenced him, but it only enhanced the searing originality that became the final interpretation on Turner's own canvas. There was even an amusing anecdote in the exhibit program: "No one liked being put next to Turner, as it seemed as prejudicial as being placed next to a window." I laughed out loud at that, and quickly turned it into a cough (*FAIL*) as the grey heads of my fellow perusers turned to stare at me and frown in French disapproval. HAHAHA!

The path of paintings rapt up my hydrophilic soul (yes really, I just said that and I'm not taking it back): 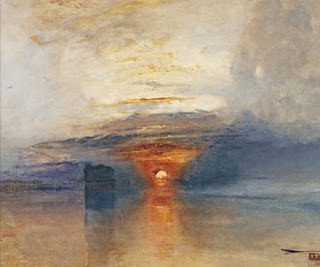 This is only a part of the painting, and honestly I didn't really like the rest of it - it seemed too horribly human and took away from the magic of this perfect sunset. Well, I'll let you be the judge: 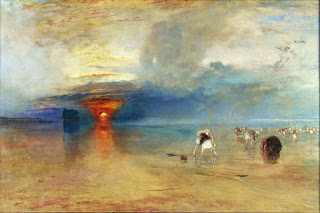 Anyway, the grand finale was, of course, my crazy all-time favorite: 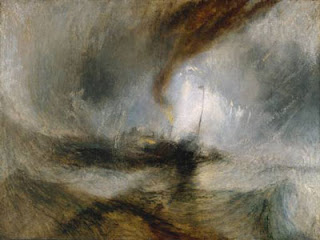 It was on to Rodin's house next, a short 30 minute walk away. I walked through the gates and immediately felt at home. It was so sunny and peaceful, and even though there were crowds of people, I wasn't annoyed like I usually am. I walked around, saw the door to the gates of hell: 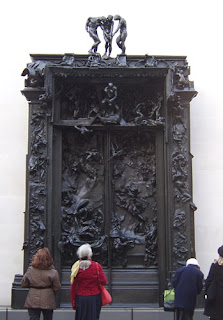 ...and then meandered over to the other side of the front lawn, stepped around some bushes and was all WOAH: 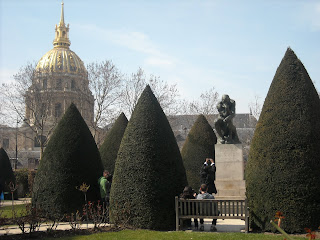 haha dude, I recognize THAT one lol!!

The back "yard" was even more impressive than the front: 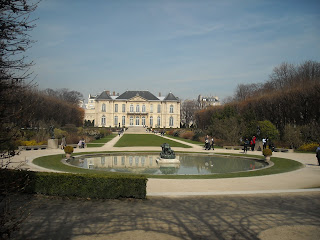 Feeling like a character in a Jane Austin novel, I pretended that I was at home on my Pemberly Estate, taking time out of my busy day of party planning and horse riding for a little picnic. 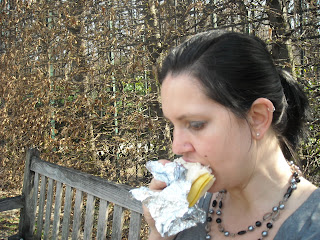 Afterwards I headed up to the Tuileries: 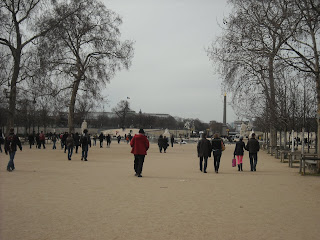 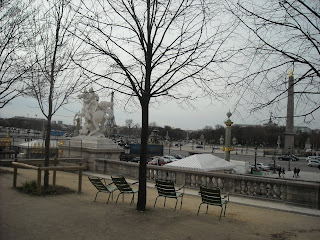 at the end of which was l'Orangerie, the greenhouse-turned-Monet museum: 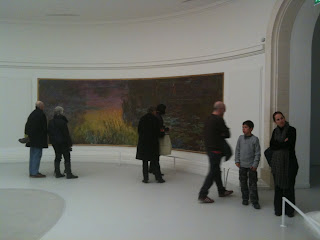 ...huge oval sunlit rooms with built-in murals of water lilies. It was like being hugged in a purple-and-orange nature embrace, and I sat staring into the ponds, the noise dying away and the rustle of the overhead willow trees taking over.

I don't know what has happened to me in the last year or so, because I never used to like the impressionists that much. I feel like I've never really absorbed the paintings properly before now. I never wanted to admit that, of course, because that's just embarrassing, right?  Is it maybe because these impressionistic paintings have always been there, at home in my grandparents' house since before I can even remember remembering? Like not appreciating the quality of my intelligent, comfortable upbringing until I left and thanked all the gods I was raised in that small, hidden-treasured Midwest town? Perhaps it's no more complicated than that it's just the time in my life when I'm starting to really appreciate the Impressionist perceptions--I feel as if I'm "coming home" when I revel in the fuzzy clarity of a purple water lily, or a post-storm seascape.

Speaking of home, my next stop was to the sewer museum. I mention "home" as a loose segue; I was raised to think outside the box, which I have since exploited into a weirdness that the original values probably never foresaw. LOL! Anyway, pushing aside my spine-tingling fear of dark, enclosed, underground-y places, I bought my ticket from the bored man behind the outdoor booth in one of the nicest areas of Paris. I headed down and down and down the stairs, where the smell of damp stones and barely-contained poo gave me an insta-headache. Ulgh. 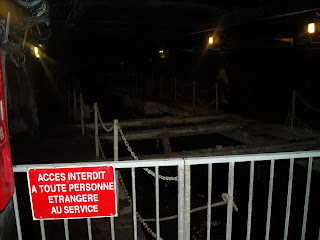 Did they really have to make it so stereotypically dimly-lit? Sheesh. So here are the see-through grated walkways over the rushing flow of dirty water that has been semi-processed at this point. I think. This is a whole underground world of passageways, but you always know where you are in relation to the above-ground city by street signs identical to those en plein air: 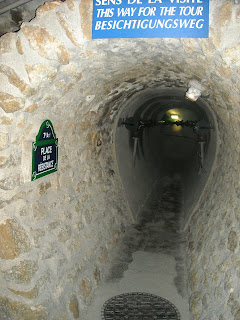 There are glass cases of detritus pulled from the sewers over the centuries, swords (!!) and all: 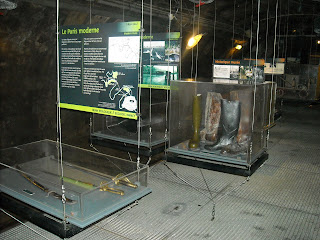 ...and even, in true French fashion, art on the mildewy walls! 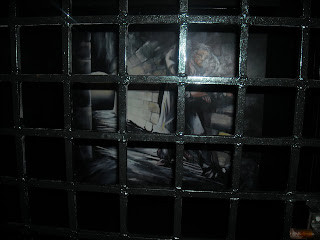 (This would be a scene from Les Mis, of course: Jean Valjean is carrying Darius through the sewers to save him from battle.)

The day was rounded out with a special dinner Madame prepared just for me: Appetizer of anchovies, hummus and bread, main course of saurkraut, potatoes, and la pièce de la resistance: La Tête De Veau.

"I was raised to think outside the box, which I have since exploited into a weirdness that the original values probably never foresaw"

Amen, sista. And thank you for it!