A funny thing happened on the way to the high school

1. I got mistaken for a German tourist.
2. A student asked me out--DURING CLASS.

First the First: So I leave the library one day, hungry as usual, and discover a little sammy place where I stop in to try a hot panini. I'm the only customer, so of course the sammy-man wants to have a little chat. As is wont to happen when I open my mouth to speak French with a solid foreign-type accent, he's all, "So where in Germany are you from?" Keep in mind the French words for German and American are sort of similar, or, well, ok not really, but at least they both start with "A": Allemagne and Amérique. So I had opened my mouth to say New York but then realized he was saying Allemagne and quite embarrassingly choked on my own breath as I tried to take back my answer and blurt out a "QUOI? COMMENT?" instead.

But woohoo! for me speaking and looking German-y, haha!

Second the Second: Later that same week I'm in class, trying to have and getting nowhere with yet another discussion about immigration. So I decide it's a good idea if I do the goofy dance and play a game of hangman with the students instead. Then, a few minutes before the bell rings I politely ask if anyone has any questions for me, because, duh, I'm here to teach them good things about our fabulous English language and life in America. The class clown pipes up and is all, "I would like to know if you will go to a movie with me!" The other boys in the class, who until this point had been slouching and acting a bit bored, sat up like a fire had been lit under their desks and started laughing and staring at me to see how harsh the rejection would be. But ooooh they don't know Americans very well, now, do they! They got another good laugh when I said, "Well, I only like science fiction, can you keep up with that?" And the poor boy just giggled and didn't have any good comebacks to that one.

And then, in the very next class that exact same day, in response to my "Do you have any questions for me?" the students asked if I had a boyfriend. Sheesh. When I answered in the negative, the students were quite excited to tell me about one of their teachers, whose qualifications were the following: aged about 50, divorced with one kid, but he looks like George Clooney and is "a hot rabbit."

QUOI-COMMENT? What the hell is a hot rabbit in ANY LANGUAGE.

Whatevs, the most important thing about the week was that we decided to have a Fiesta night, with tortillas and tequila! Woohoo! 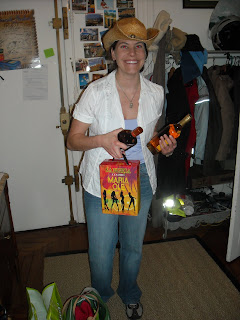 PTPO, Fiesta Queen
We again mélange-ed some international partyers (partiers? damn, I know both are correct but NEITHER of them look like real words. And NO I'm not drunk! Yet.) with a dinner table full of Americans, Frenchies, a Brit, and even a "Greek that looks like a Mexican" (lol! Saint Denis your English is coming along nicely heh heh). 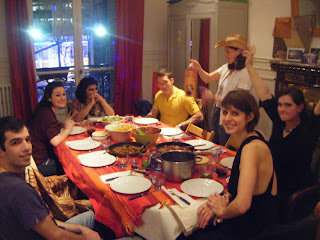 How do you finish up a week like that? Perhaps a trip to Aix-en-Provence, you say?
To be continued...