Today I played the Murder Mystery Game with my class of Horrid Boys Thursday Group. HILARIOUS.

Each student got a character card. I gave them some background info: Ms McGowan, an grumpy old English teacher (got a few laughs on that one) was killed during a school reunion. I gave Horrid Boy No. 1 the role of the murderer; I figured he'd be pleased. He was.

And I myself was pleased with everyone's involvement! They really got into playing their roles, spinning off the cues on their character cards and making up funny details on their given alibis. The Murderer claimed he was in his office at the time of the crime, but when another suspect refuted that by testifying that there was no answer in The Murderer's office upon knocking, The Murderer cleverly put forth that he had his headphones on and was listening to loud music while engrossed in updating his status on Facebook.

But you know what's not pleasing is a lack of creativity. Dude, for several other classes I tried to follow a really good exercise that my mom uses with art to keep her students actively participating by asking questions about a painting. I chose Guernica because these French students have to practice speaking about controversial subjects in order to prepare for their big graduation exam. And hey, I thought a big disjointed painting depicting the destruction and lifelessness of war might do the trick. I wrote up some discussion questions, like "Who is the artist?" "What title would you give this painting?" "What is the message?" "Why is this painting in black and white, not color?" "Are there any works of art that depict war as glorious and good?" "Would you buy this, why or why not?" "In which room would you hang this painting?" etc. etc. etc.

Every student knows it's Picasso, but they don't know the title or background information of the painting, which is cool because I get to waste time giving a little history lesson. The titles they make up are so boring, like "War" or "Room with Fighting Animals" or whatever. And they always say they wouldn't buy the painting because it is too ugly. However, points to the student who said he'd hang it in his "toilettes" because "it's too ugly to look at very often."

Anyway, whatevs, to offset these annoying classes Pull The Prick Out provided an outlet in which to treat ourselves to decent pizza, a bottle of wine and... 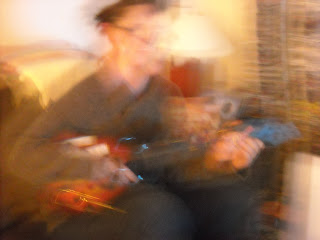 What's that you say? Oh, it's blurry? Well maybe it's because I'm a BAD ASS and TOO ROCK STAR to photograph in ACTION.
But I will take pity on you plebes and do some slow-mo for ya: 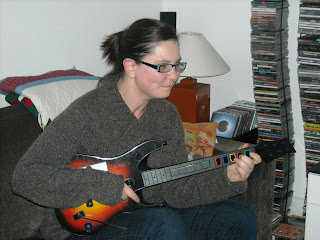 That's right, thus beginneth the tale of My South Park Reality Part Deux as I succumb to the siren chords of Guitar Hero. 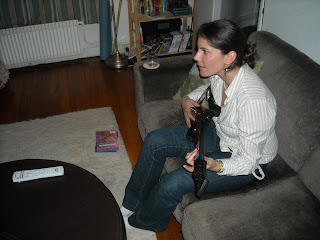 PTPO had such a difficult time keeping up with me as I dealt a death blow to her Difficult Willie Nelson with my Easy Peasy "Walking in a Spiderweb." Whatever, she might be able to out-strum and out-shoot-flying-devil-bunnies me, but I WHOOPED her ass in hoolahoops, don't ever let her forget it!
Shut up shut up shut UP you know you love it too! If someone handed you a magic guitar you'd be so glazed-over focused on the video screen you couldn't pry your eyes off with a superglued crowbar.
GAAAAAH! I rejected all attempts at this plastic, mind-numbing crack for YEARS and made so much fun of people who play video games! But I mean, really, it was only the one time, and I didn't even inhale. (Yo, PTPO, call me. I'm supposed to save the world tomorrow and watch Lost with The Sultan, but I can probably rearrange if that's the only day you're free to have me over this week.)
kK
Posted by kK at 08:52