Lactose intolerance, beware-
To defeat you I dare
Armed with naught but some wine and a smile

Bubble, boil, but pas de trouble
Melt au pot, and then, on the double
Add your creamy kick to my ham and 'shroom pile 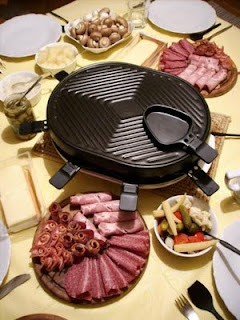 That's right. Gimme my raclette, and nobody gets hurt.
La Reine Soleil was in Paris for a visit, and invited me to a cheesy fondue party with her hilarious group of friends. Thank the goddess, because it was one of the funnest nights of my life! And most delicious. And most Frenchy - my last all-in-French dinner party! I'm not sure I'll ever stop being shy about speaking French, but looking back on my first weeks in Paris and how tongue-tied I was, I'm slightly amazed I can stumble my way through slang-filled conversations about religion, politics and wine. It's too bad the trains stop running so early, because that party could have lasted a good 12 more hours. As it happened, a few of the guys at the party lived only a few minutes from me, so we were able to rush together to catch the last metro.

On the train ride home the lovely mecs commented that they had to get up really early the next day for work, and asked if I had to as well. It was then that I taught the Frenchies a very important word en anglais: bum.