So I have discovered how much fun it is to relive childhood moments with real life youngsters. Like an out-of-body experience, I have watched myself actually enjoy reruns of Sesame Street (who knew Feist could teach fuzzy monsters to COUNT TO FOUR so melodically!), get upset when the Hercules disc was too scratched to play on the dvd player, and gulp Nesquik chocolate milk while singing The Climb with Hannah Montana and admiring Billy Ray's new haircut. (I still vomit in my mouth a little when I hear the words "Jonas" and "Brothers" anywhere near the same sentence, however. Actually, a lot. All over the desert island to which I banish them.)
After posting an ad for private tutoring at the American Church, I got a call from a Spanish family for Wednesday night 2-hour sessions with their 8- and 10-year old children. I was a little hesitant at first because, well, me and kiddies...erm, not so much. But hey, I'll try anything (almost) once, and if they turned out to be little terrors, I consoled myself that I just wouldn't go back.
But to my surprise, they were actually really well-behaved and smart! I helped them with their homework and, when there wasn't enough work to fill the hour, we'd dance around in plastic Asterix helmets and sing songs from High School Musical. (I know, I KNOW! Number 3 IS the best one, I totally agree!)
The first time I babysat and ate dinner with the kiddies I was interrupted from my stuffing-my-face reverie with a little 8-year-old-boy squeak: "Pleeze to 'elp wis fud?" as he made cutting motions in the air with his knife and fork. OMG! After picking my jaw up off the floor and looking around to see if he might not be talking to someone else, I, feeling exceptionally awkward, cut up SOMEONE ELSE'S chicken cutlet into bite-sized pieces. And didn't eat them myself.
And one night around Christmastime we settled in to watch Rudolph the the Red-Nosed Reindeer, yes, that Christmas special from the '60s hosted by Burl Ives the Snowman. I hadn't seen it in a reeeeeeally long time, so I was really excited when I stumbled upon a European dvd player-friendly disc at the library a few hours before I was due at their house to babysit. A few minutes into it, though, I began to fear it was too old-looking and weird for this new generation, but as soon as the first song started, Jaime started bopping his little feet and Blanca even tried to sing along with the lyrics as the subtitles popped up in time with the music.
Yay, old fuzzy Rudolph animé wins over another batch of kiddies!
Anyway, they found my camera one night and took a lot of really incomprehensible, fuzzy photos of I-don't-even-know-what objects, but here's one where we actually all came out looking like human beings, which is kinda sad because that means my photography skills are only slightly better than a 10-year-old kid: 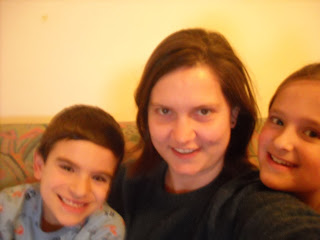 Movie night!
And thus endeth kK's adventures in babysitting. Maybe they'll come visit me in America. The parents are really anxious for them to learn English and they all think I'm super sweet and mature. Haha yar, if those kids come over here I'll take them to all my usual shady hangouts, you know, the library, the local cemetery, dangerous places like that.
Posted by kK at 23:51