So what does a Klutz with a capital K who can barely manage to walk in a straight line soberly do? That's right, she buys a BIKE!

Like any warmblooded American kid, I grew up riding a bike. After the tricycle stage, my inner fashionista picked out a white Huffy decorated with Ewoks to parade around on the oh-so-heavily-trafficked country roads of Indiana. I had my fair share of petit accidents, but this was back in the day when, like, one car per hour (including those that lived in the 'hood) drove down my road, and politely slowed down and pulled over as far as possible to the side in order to avoid even a hint of a close call kiddie collision. (haha, damn, how do you like THEM alliteration apples! haha, I did it again! LOL! I'm sober, I swear.) 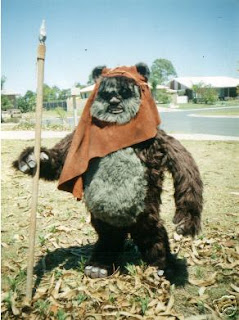 Fast forward a bit to university life, where I graduated to slightly steadier lines of traffic through the roads intersecting our Nashville campus. Every so often there'd be a rumor of a student being hit (Southern slang for a slight bump, no visible signs of concussion) by a car, but those dummies were usually on foot and stupidly ignored the impatient cars sick of giving the students the right-of-way. I spent several years safely, if slightly geekily, pedaling my way from the far end of the Arts & Sciences campus for French class to the other end of the universe for music practice, my huge backpack and viola case making me look super cool and not off-balance at all.

After a rash of theft swept the campus and I lost two bikes and a front wheel off a third, I moved off campus and stored my newest bike in the apartment complex's gated community parking garage.

My sister (and roommate) left for a family vacation I was unable to to take off work for, leaving her cute, gold convertible on the upper level of the two-story parking garage. One evening, before going to bed, I put a load of clothes in the dryer and passed out after a long day of classes and barista-ing. In the wee sma's, I awoke to a hot, smoky smell, not (in my defense) unlike the pleasant odor of the final moments of the clothes-drying cycle. So I assume that my clothes are tumbling away, roll over, and go back to sleep... 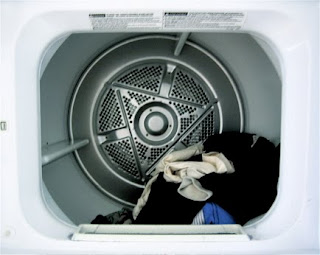 ...when I am rudely awakened once again to loud pounding on my front door. I groggily get up and angrily confront the apartment manager standing outside, but before words can exit my mouth, he asks if I own the cute, gold convertible on the top level of the two story parking garage. Pre-coffee kK closes open mouth in confusion, has to think a moment through the fog of sleep and strange morning confrontation, then warily nods. The manager proceeds to demand why I didn't speak to the police last night, and again, pre-coffee kK has trouble 1) not slapping the rude idiot on my doorstep because seriously, WTF is he talking about, and 2) functioning.

Eventually, I get a more coherent explanation, although even to this day I still can't quite believe it happened.

A Scene Brought To You By Jerry Bruckheimer

In our apartment complex was a woman who inhabited an apartment one floor and two doors down from my own. On the night in question, she decides to let out the inner apeshit and attack all the convertibles in the apartment complex, first slashing the cloth tops with a razor and then lighting them on fire with her handy Zippo and portable gasoline can.

Beginning on the bottom floor of the two-story garage, she manages to decimate 3 convertibles and is headed up to the top level, when the police wrestle her away from the cute, gold convertible on the top floor of the two-story parking garage. But not before she inserted her razor and left 4 through-and-through slash marks through the black cloth top. I find pieces of one razor (pieces? what the waht?) and one in its entirety still embedded in the top when I run down in my hot shorts and bare feet to see with my own eyes the state of my sister's car. I pick up my jaw and let out an hysterical giggle, then a sudden thought strikes me and I run down the stairs to the bottom floor of the garage where the bike rack is.

All the cars have been cleared out, and through the black smokey residue on the concrete walls I see my bike. In a melted puddle of silver metal and black rubber. Le sigh.

I didn't bother getting any more bikes after that, as I had graduated to driving a car and then, during my subsequent years in Chicago and New York, public transportation. Eight years later, on the crowded, crazy streets of Paris, I am somehow talked into climbing onto a Velib' to cross the arrondissements for my 148th visit to the D'Orsay. 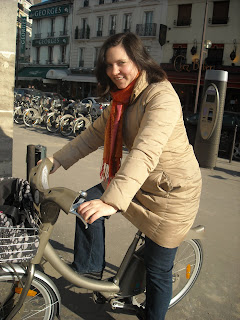 I Have A Dream

For several years now, I've had a very strong mental image of myself on an old refurbished bike, preferably with a front basket. I've never acted on this dream, in part because bikes are so expensive, but mostly because I don't feel any connection to bikes I see in shops. I assume I will just never ride a bike again when tout d'un coup, a coworker happens to mention www.greatusedbikes.com. I visit the site, and fall instantly in love with: 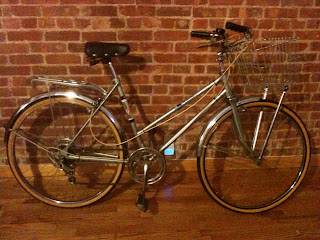 YESSSSS! John is amazing and incredibly nice, responding to my emails practically instantaneously. He delivers the bike at 8 am on Sunday, allowing me to ride around the block so he can see how much to adjust the bars and seat. He promises to come back and fix anything that might go wrong, and my coworker has already attested to the veracity and thoroughness of his claim. I am super excited to have found him!

I HAVE AN OLD REFURBISHED BIKE WITH A FRONT BASKET. 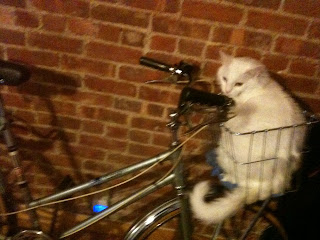 (Did I mention my bike has a front basket?)
The bike doesn't have a name yet, but like any great moniker, something dramatic and/or hilarious will happen and it will assign itself automatically. And I'm equally sure it will make blog headline news. HA!

But for now I am basking in the happy glow of finding another piece of my slowly-becoming-whole self.

Email ThisBlogThis!Share to TwitterShare to FacebookShare to Pinterest
Labels: bike, crazy, what the waht, woohoo

I just read this - that is INSANE about your former neighbor's arson and vandalism bender! Day-amn.