OK, so there are books one must read even though--nay, BECAUSE--one knows they will be horrible. Current reading list: Dracula The Un-Dead, by Dacre Stoker (direct descendant) and Ian Holt (um, expert).

Putting aside the fact that the book is written by what appears to be two 17-year-old boys and a hopefully appropriately-aggrieved and over-worked editor (I say 'hopefully' b/c to me the book has an air of heavy shit-this-is-the-best-I-can-do-with-what-I've-got-to-work-with editing; otherwise, if this editor actually thinks this acceptable material, well, humph, let's just have a little chat with Elizabeth Kostova, shall we??), it just once again proves that Sequels Are Pretty Much Always Terrible, especially if they deal with Draculas, Rosetta Stones, Knights Templars, and/or Cardenios. (Exception: a sequel by Christopher Moore dealing with ALL OF THOSE SUBJECTS AT ONCE.)

So, anyway, after altering the dates of Bram's story to fit their own arbitrary timeline, scene one opens twenty-five years after the infamous staking. Jonathan Harker is an over-bearing drunk of a father and husband, who thinks Mina is in love with what used to be Dracula and as obnoxiously as possible forces his theater-loving son to go to law school. The Dis-Band of Heros is taking angst to a whole new level, and really, why do people think it's a good idea to try and keep secrets and then be self-righteously surprised when other people discover said secrets, have a huge hissy fit they weren't informed earlier and then storm out into the dark dangerous night? Anyway, the real fun begins when Someone Important is impaled Vlad Tepes-style in the middle of Picadilly Circus, and a hot lesbian vampire reveals her plot to make Inspector Cotford her new pawn in a fun-for-hot-lesbian-vampires game of eat-the-human.

And I mean really, how can you not love lines like these:

"He stood at the crossroads of destiny. His dreams would have to wait."


"His coat, still damp from the earlier rain, did nothing to warm his body. Neither did his swirling, angry thoughts do anything to warm his soul."
"Tears from heaven poured to the earth as if God knew that tonight his reign would finally end."

"The razor-sharp blades sliced his fingers from his hand, the digits spinning through the air as he shoved Bathory's blade aside."

"Feeling cold and unsteady, he looked down. He had been gutted from his chest to his privates, and his innards were spilling out of his body. Marrow felt ill, and a strong urge to vomit. But as he tumbled back, he realized he no longer had the stomach for it."

Oh, did I mention that Bram Stoker has a cameo as a whiny, put-upon playwright stubbornly insisting a drunk John Barrymore play the stage version of Dracula, and, as if that weren't enough, Van Helsing is now suspected of being Jack The Ripper? Throw in a most beatific Luke*-I-Am-Your-Father showstopper followed by a couple of vampire fireballs off a really tall cliff and, wait for it...two mysterious large-enough-to-fit-a-human boxes being loaded onto, oh yes, THE TITANIC...No, it's just too fun. You must read it for yourself. It literally is just as good as you think, if not more so. And by "good" I mean terrible in that awesome must-read way, like Jemaine Clement is Ugly Hot, or Crap TV is Really Fabulous. 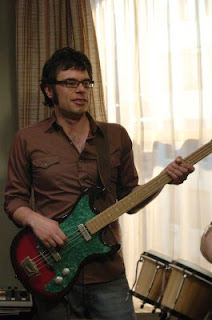 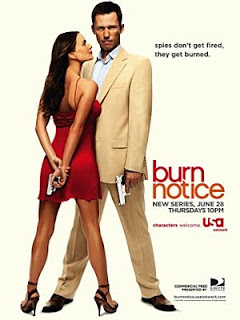 And oh yeah, you might have heard of this teensy French (and Squash and The Sultan before they even got to Paris) obsession with black-and-white/navy-and-white/black-and-grey/navy-and-grey stripes. Apparently these stripes cast a magicky spell on anyone who stays in France too long (any amount of time greater or lesser than an hour) and it actually becomes your number one desire to parade yourself around in public with horizontal stripes on your person.

I clung desperately to the edge of reason for about four months. 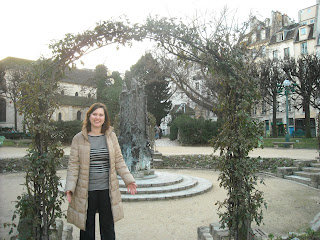 Now, with your own eyes, you can see how far I've fallen. Next thing you know I'll have stopped shaving my legs and armpits.
Oh wait...

kK
*So I've definitely been in France too long...I just wrote down Luc for Monsieur Skywalker's prénom. I almost left it to see if anyone would notice but wait no, that's just embarrassing.
Posted by kK at 18:26