Sporks and good dive bars, but that's beside the point.

(Is it "besides" the point, or "beside?" Grammatically speaking "beside" is probably the correctest, but I like adding that s when I say it out loud. Gives it some ooomph. I know it's definitely "you've got another THINK comin'" not "thing," and "for god's SAKE" not "sakes"--does god have more than one sake? Well, maybe, but no, NO, it's singular. SINGULAR SAKE. Which makes me think of sake, like, the rice wine goodness that goes so well with beer and never ever gives me a hangover. YUM.)

The point, actually, is that last week I went to the theater with a bunch of 17-year-old French high school students. For some reason, I didn't really expect the ENTIRE AUDIENCE to be made up of 8,004 teenagers and, like, 6 harassed-looking French English teachers, but there you have it, life is just full of surprises.

One of the teachers I work with decided to organize a field trip (OMG field trip! I haven't been on one of those since my own high school daze aaaaaahhhhhh!) to the theatre anglais to see a very heavily adapted Picture of Dorian Gray. Since I got to go for free, I was all, hells yeah I'll go. And so yar, I went. It was mostly horrible, as most of my theater-going experiences usually are (there is just SOMETHING about stage acting that seems so over-done and makes me oddly uncomfortable and embarrassed) but at the same time IT WAS AWESOME. I couldn't figure out why all the actors were speaking in what seemed like slow motion, but then it dawned on me they were enunciating so much, not only because they were British, but because they were trying to make it easier for the students to understand. That was really cool! And it seemed to work, too: our group of little shi--I mean, very intelligent and mature étudiants managed to laugh at even some of the more obscure humor, and I was duly impressed, if not slightly jealous of their level of bilingual-ity.

**kK Tanget 05**
That reminds me, I REALLY need to go visit Père Lachaise! Gah! What is wrong with me...it's like 2 metro stops away! I could WALK there on a nice day! Or even a not-nice day! Oooh, that would be good...go in the rain...maybe there would be fewer people crowding the tombstones.
**possible end to kK Tangent 05**

The teacher that organized the trip was really glad I came, and sent me a text saying that she "appreciates" me, as do the students. Even though I doubt the students actually said anything like that, it still made me feel nice. And then on my walk home and happily stumbled upon a surprise co-op where I greedily snapped up some ingredients for my Green Power Juice, along with some RAW MILK--that's right, straight from the udder, baby!--that I promptly put on the stove for some good-ass chocolat chaud. (Or good ass-chocolat chaud, depending on whether or not you like putting the wrong emPHAsis on the wrong syllABle, "wrong," in this instance, being neither right nor wrong, really, just personal preference and a penchant for reading really nerdy webcomics.) 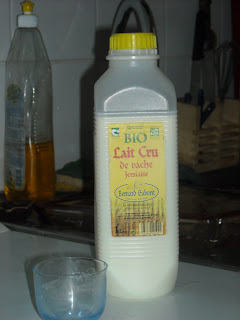 And on another happy note, Squash and I found a dive café! That's right, just like a dive bar but IN FRENCH. It's all dark and kinda seedy but in a welcoming way; the drinks are cheap, the customers regulars, and there's even a cat that sleeps on a couch in the back. (The bartender thinks I'm from California, which is so funny I won't bother to correct him.) I raised a tumbler of Jameson to the 86-year-old-man club, tossed back the rest of the drunkard Squash's half-full wine glass and then ran across the street for the best pizza in Paris. No seriously, apparently chivalry ISN'T dead. Or did I mean miracles DO occur. Or will wonders never cease. Whatever. It was Good. Ass-Pizza.
I can't decide which is more exciting, good pizza or a DIVE BAR IN PARIS. woohoo!
kK
Posted by kK at 10:17

i know i know! whichever one sells lait cru!