Oh Champagne, how I love you...

Reims (pronounced, in typical exception-to-every-rule français: 'raz') provided an entertaining, if slightly too-long, day for me on Saturday. I hopped on the TGV at 8.30 am, and 40 minutes later arrived in Champagne to visit as many champagneries (lol! I love calling them that) as I could fit into one day. Alas, only TWO were open (b/c why would you keep your 'cave' open on a weekend when people don't work and want to taste champagne?) so I booked both for tours in French.

I had some time to kill before my first cave (kahv), so I walked around...and around...and around. (I knew I was in the right town when I came upon Rue Dom Pérignon!) I found the Christmas market, had a coffee, stumbled upon the old cathedral where all the French kings were crowned, and finally headed in to the warmth of G.M. Martel, where a very nice lady led us all around the underground caves and tunnels. 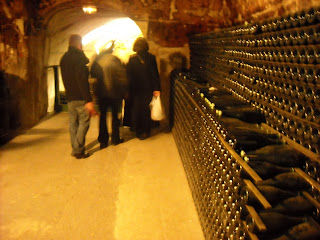 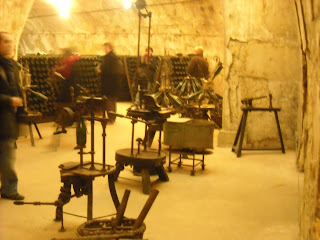 Then I went back to the Christmas market, where I sat next to the ice skating rink and watched the little kiddies roll by in time to some really weird french reggae music as I munched on a bison "hamburger:" it started off in patty form, and then the youngster serving it chopped it up into slices and laid them all carefully into a baguette. I love France! 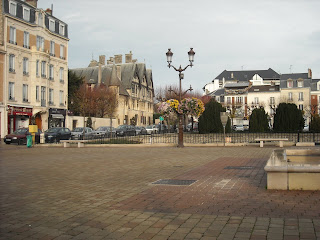 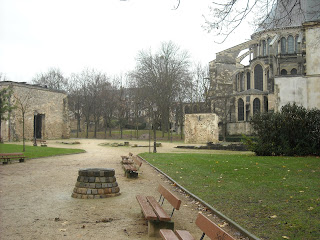 Cathedral: where French kings were crowned

Then it was off to les caves Pommery, a champagnery so vast it looked like a cheesy Walt Disney-type castle spread. Very Stepford-esque, but still interesting, and hey, anytime I get to drink some bubbly is a good time for me. 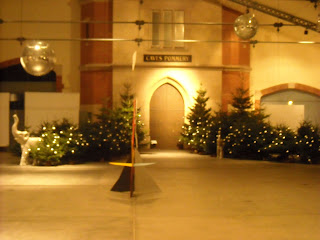 Caves Pommery: Where brut champagne was invented (by a woman! woohoo!)

At this point it's finally dark out, but not yet quite time for me to head back to catch the bus back to the train station, so I visit the Notre Dame cathedral in the city center, and was pleasantly awed by the interior...it just kept GOING, and it was so GRAND. The hectic-ness of the Christmas market after the zen interior of l'eglise was a bit of a jolt, but I needed to eat (again!!) so I braved the masses and grabbed a sammy from one of the vendors sprinkled throughout the Christmas huts.

At this point I'd been walking and drinking around the city for about 10 hours. It had rained on and off throughout the day--I was pretty wet and supremely chilled, so I decided to get on a warm bus and make my way back to the TGV a bit early. Back in Paris, I limped in to my room, not even stopping to pet kitties as I threw on my jams and ripped off my wet socks. I joined Madame in the living room, where I sipped hot tea and ended my very long day by watching the Miss France pageant. Miss Normandie won. (because I KNOW you care...)

Great pictures and commentary, KK! (And félicitations to Ms. Normandie.) Reims was a favorite field trip destination back in the wild days of Air Force base living in the 80s.