In a nod to one of my favorite blogs, gofugyourself.com, I'm going to start issuing the gold standard "well played" card to a few deserving people/places/things to counterbalance my posts wherein I make fun of everything, and everyone, else. First up, Munich. 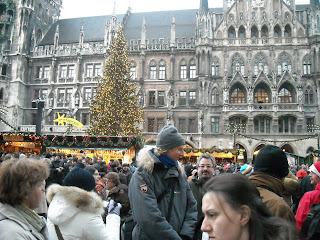 Just spent two of the most fabulous days EVER in my new favorite city. Why is the German language so hot! I never liked it before, always made fun of it ("it's like cats spitting!"), but someone sprinkled magic dust on me and opened me up to the joys of Germanity. It might have been the innumerable litres of duple bock yumminess flowing straight from the tap into my wine-hardened veins, or maybe the Christmas spirit in the outdoor markets in the city center, or shit, it might just be all those sausages taking their toll in the sausage-shaped holes in my stomach, but whatever it was, ich liebe dich forever, my city of big strong men and funny accents and really F*ING good beer! 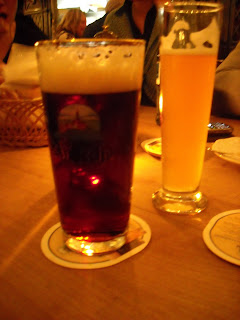 Some of Squash's family lives in Munich, and they more-than-kindly picked us up from the airport, provided a private apartment-hotel room for us near the city center, and took us around to the Christmas markets, non-touristy delicious food joints, and, most importantly, beer halls and dance clubs. Yes, I actually did some **gasp** dancing on Friday night, but fo' reals, how can you not at least tap ye olde foote to some fun American pop music! The techno, house and hip-hop I can do without...seriously, I can't dance to that shit. But I (along with the rest of the red-blooded human beings on the planet) spontaneously combust into dancing flames when Madonna comes over the loudspeaker. Well, that, and somebody handed me a red bull-and-vodka that I retardedly drank without thinking (probably b/c I was already swimming in a good litre--or two--of duple bock). 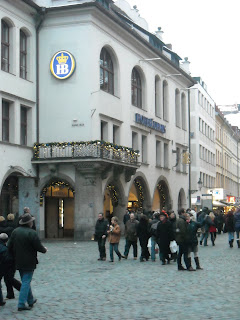 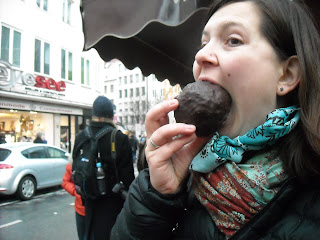 What happens Saturday night? Oh yeah, we meet a group of boys coming out of the metro stop and discover that we are all headed to Hofbräuhaus for some burrrr. Who are they? Oh yeah, the American bobsled team.

Yar, five members of the US Bobsled/Skeleton team were taking a break and touring snowy Munich without coats...we never heard what actually happened (they made it sound like quite the story, but they probably just friggin' forgot them on the train or something), but whatever it was, somehow we all ended up bicep-curling heavy litres of Hofbräu Dunkel, laughing till the tears flowed at the group of Italians and Germans singing their respective football team spirit songs (the German group won that round by picking up their extremely heavy picnic-style table, lifting it over their heads and drinking beer at the same time...did I mention they were wearing lederhosen to boot??), and shouting over the ridiculously loud brass band playing Sousa-esque German tunes. 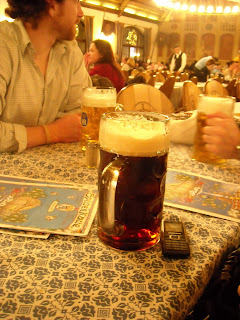 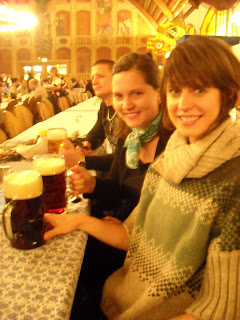 At Hofbräuhaus with the bobsled team, lol!

I really thought they were joking at first when they told us they were the bobsled team...I mean, I literally laughed out loud and tried to cover it up into a cough when I realized they were serious. (What! My, uh, lungs were aching with the cold. Yeah.) But then I realized, why the HELL would anyone make up a story like that, and how would they even keep it going all night with all the questions we would undoubtably be asking. And then I was like, yo, who really cares if they ARE making it up, these dudes are HILARIOUS. Some of them took themselves a little too seriously, but Mr. Daly from Long Island made me laugh so hard I nearly shot beer out of my nose about 800 times. 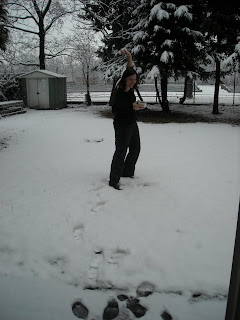 In the Munich snow with a cuppa joe

I can't believe how much fun it was! How much FOOD I ate...ahhhh. I can't imagine eating that stuff every day, but that's what hot pink juicers are for, heh heh! Speaking of, I'm now fighting off a nasty cold from not enough sleep or veggies. I'm sure it has nothing to do with how much beer I ingested.

And PS...I definitely googled the US Bobsled/Skeleton Team and found our five drinking companions on the official website. Woohoo! Guess who's watchin' the Olympics THIS year!
Posted by kK at 21:10

Love following your postings! You have me laughing out loud!!! Be safe while you enjoy your adventures & keep dancing!