The cat who spoke French, or happy arbitrary birthday, universe!

So everyone and everything is about to turn another year older, and I'm celebrating with a bottle of champagne and a late dinner with Picasso, Madame and Benjamin. Oh, and of course les petits chats, who will most likely try to add a garnish of cat hair to our sauerkraut as they strut their stuff and try to block our view of the tv.  awww!

It's funny to think that this time last year I was in Paris with Ageless, the trip that inspired me to come live here in the first place! 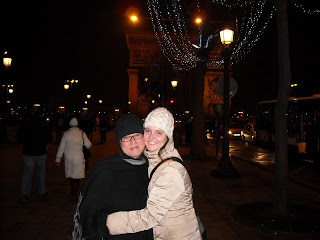 And now, 365 days later, here I am again, having eaten some sort of weird meat cuts that I think might have been trying to be hot dogs, along with some sauerkraut, potatoes, baked apples and 3 different kinds of cake for dessert! ahhhh! I think I might burst. Plus I drank most of the bottle of champagne so I'm a little swimmy right now, woohoo!

We watched some amazing tv this evening...it was a French 'spectacle,' which included more magic skits  in one hour than I've seen in all the years I've been alive, and a bunch of acrobatic numbers that were really pretty amazing. The French are SO WEIRD. I can't get enough!! And then, once it hit midnight, we yelled out the window at the top of our lungs, then shut it really quickly so we wouldn't freeze to death, and then faire-d les bises on each other's cheeks and clinked glasses and danced around the room a bit to the snippets of each decade's hit songs that the tv was blaring as a tribute to...well, each decade's best songs. 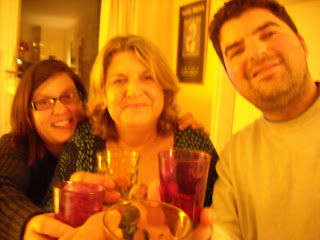 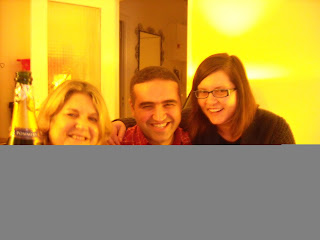 Madame, Picasso and me (and CHAMPAGNE woohoo!)

All in all it was nicely tame and relaxing...I was warm and sleepy (yar, I nearly fell asleep at the table at like 10.30...I can't even make it until midnight any more!!) and I managed to keep up with all the French conversation 'round the dinner table all night! (I think I even managed to be funny en français, or maybe it was franglais, but woohoo none the less!)

And now we have some gratuitous photos of les petits chats, who really do only understand French! I tried talking to Sushi in English and she totes ignored me, then I said 'viens ici!' and she turned and looked at me! Of course, she didn't actually COME to me (b/c why would a cat actually do what you asked it to), but still, she understood what I was saying! LOL!! 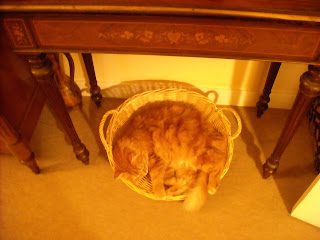 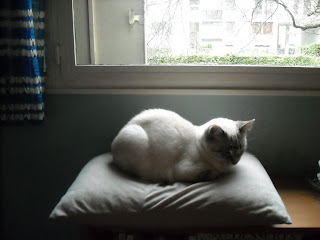 Sushi on her bed by my window

OK, it is nearly 4 am somehow, and I didn't even go out dancing tonight!

happy new year deary. i am an old lady too =)
wishing you a happy and prosperous new year filled with lots of fun stories that i can read about here =)

oh, kK... happy new year, dear. not deer, but dear. of course, this would be funnier had you been listening to me speak these words while i type. yep, self-entertainment this afternoon. a day after the day after. a bit sardonic and melancholy today, but thought i'd drop in for a new year's cheer.